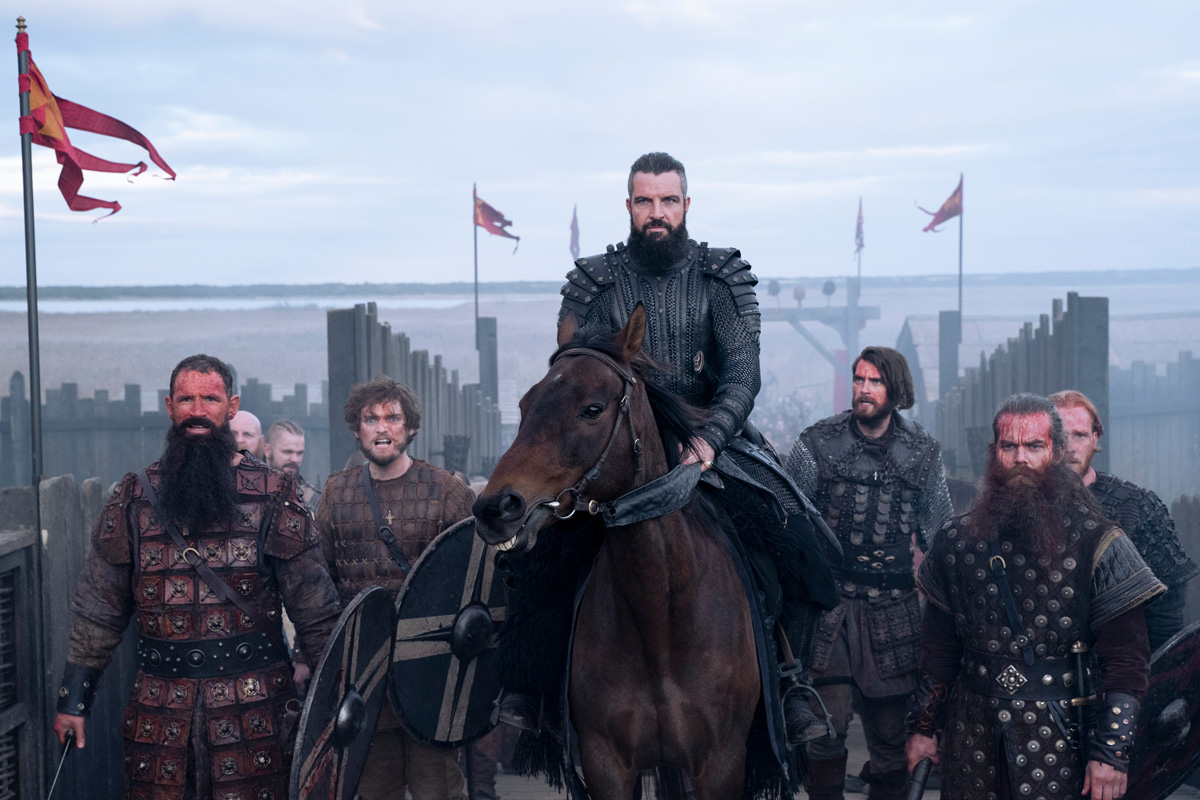 The 2013 show, Vikings, became kind of symbolic of the raiding, trading, and exploring Norse race that graced the beaches of Scandinavia in the 9th, 10th, and 11th centuries. From the bloody clash of spear and shield to the joyous merrymaking of Viking feasts, this drama managed to capture the daily dynamics of this race like no other.

A harmonious balance of historical accuracy and astute dramatization.

Now that the story of the crew and clan of Ragnar Lothbrok comes to an end, the producers are all set to take you 100 years forward with a sequel show and take you through the final years of the Viking Age as the continued conflict between the Norsemen and the English Royals rages on.

The story of Vikings: Valhalla is viewed from the eyes of legendary Norsemen and women like Harald Hardrada, Leif Erikson, and Freydís Eiríksdóttir. Just to give you all a history recap, Leif Erikson is the Norseman who is widely considered to be the first European to set foot in America. Checkmate Christopher Columbus!

So, rest assured, there will be plenty of exploring, action, and seeing new faces. Talking about new faces, the cast is full of exceptional talent. Top of the billing cast is Sam Corlett as Leif Erikson. He is well-known for playing Caliban in the Netflix Series, The Chilling Adventures of Sabrina.

Corlett will be joined by the amazing Laura Berlin who will play the widely celebrated noblewoman, Emma of Normandy. We’ll also get to see the able faces of Pollyanna McIntosh, Frida Gustavsson, and Leo Suter when Vikings: Valhalla hits your Netflix dashboards on the 25th of February.

If you haven’t yet watched the trailer for Vikings: Valhalla, all we have to say is that you’re missing out BIG TIME. The first look is all about high-stakes drama, grand set pieces, even grander wartime speeches, and visceral action.

Talking about this goosebump-inducing action, most of the battles, clashes, and stunts that you’ll be seeing in this show were done in real-time. To keep their cast and crew safe, the team behind Valhalla hired our expert stunt-related services.

We at Total Stunts pride ourselves on helping producers and screenwriters bring their envisioned action set pieces to life. This process of materializing the perfect action sequence requires two things: realism and safety.

As far as the latter goes, Total Stunts boasts a 100% safety track record in more than 600 cumulative credits! This, along with complete Covid 19 compliance and our state-of-the-art safety gear inventory means that we will have all  bases covered when the production of your masterpiece commences.

The realism part is achieved by our excellent team of stunt performers, stunt riggers, and fight choreographers. Leading them all, is our very own Joe Condren, who has more than 35 years of industry experience to his name.

Movie enthusiasts would know him as the mastermind behind the bus flip scene in Intermission, the crime film that starred the likes of Colin Farrell and Cillian Murphy. Condren also bagged a Word Taurus Stunt Award nomination for choreographing that heart stopping  scene.

We would love to create something just as magical for your project. By booking our stunt performers in Dublin, you can expect pioneering service when it comes to stunt rigging, stunt coordinating, stunt training, and hiring stunt equipment.

We do this by collaborating and coordinating with the best stunt performers in Ireland and beyond. Our frequent affiliates include our horse master buddies over at Equine Stunts and our go-to arms guys at Total Armory.

For Vikings Valhalla, we worked closely with the stunt performers and swords men at Media Entertainment Ltd to ensure that the production had ready access to cutting-edge technology and phenomenal talent that would help bring the 11th-century action to life.

Collaborating with the industry’s best is always something we at Total Stunts enjoy since it’s in our core belief to deliver the best for our clients. We particularly enjoyed collaborating with James Cosgrave and Sean Condren for Valhalla.

Cosgrave, who has a multitude of experience with medieval stunts like in The Last Duel,  and has been a consistent stunt performer in the original series of Vikings, now brings his talent to Valhalla. Sean, on the other hand, also hugely successful was part of the core stunt team of Valhalla and contributed enormously to this project. A big thanks to the duo for their effort in preparing the team for the sword fights and battles.

However, medieval warfare isn’t all that we delve into. From modern gunfights to action packed car chases, we at Total Stunts would be honored to vet, help, and guide your crew towards safe and realistic stunt sequences. Who knows? Your next project could be just as big as Vikings: Valhalla.

If you’re just as excited about Valhalla hitting the small screens on 25th February as we are, hit us up on our social media accounts with a big deep war cry, Hoorah!

No comments to show.